Chaman Lal, a street vendor in an inner market in one of the city’s northern sectors, is a worried man these days. Originally from Partapgarh in Uttar Pradesh, the 62-year-old banana seller has been residing in the city for 10 years now, selling seasonal fruits for the past four years.  Sitting next to him on a raised platform, almost hidden from the public eye by a electricity junction box, is his friend 72-year old Ghanshyam Bahadur, who helps him with his street business. Chaman Lal’s worry stems from the fact that he does not have a vendor certificate and could be evicted any time.

Some distance away is Ramesh Kumar Bag, a middle-aged tea seller, who had participated in the 2016 Vendor survey and bagged an Essential Service Provider Certificate (tea selling is considered an essential service). He has been paying the monthly vendor fee over the last two years. Sundar displays his Registration Certificate prominently on his stall and looks forward to ply his trade unhindered for the next five years under the new regulations.

The implementation of the Chandigarh Street Vendor Plan has drawn mixed reactions from the city’s street vendors. It has made vendors like Chaman Lal ‘illegal’. Chaman Lal was not present when the survey for registration as a vendor was carried out in 2016, while in his friend Bahadur’s case, the lack of a Chandigarh Aadhaar card proved critical. “What will I do at this age?” asks Bahadur.

The MC enforcement wing regularly confiscates his goods. In contrast, vendors like Ramesh Bag, who continues to operate from his original place of business, have seemingly been freed from the clutches of touts and other extortionists.

The plan has led to relocation of 4284 non-essential category vendors in new vending zones within the same sector or at new locations in other parts of the city. Though they now have officially registered vending sites, they are dissatisfied with the new system, with a plethora of complaints about loss of business from relocation and lack of facilities at the new sites.

For more on the plan, read: How the Chandigarh Municipality raked in Rs 21 crore from its street vendor regularisation plan

Take the vending zone at Sector 15, established to accommodate 950 vendors, the largest in the city. A visit to the area reveals multiple rows of vendors, each given a 5’ X 6’ space and selling items ranging from clothes, leather goods, bags and sarees to fish, chicken, tea, noodles, momos and tikkis. The food stalls, with their LPG cylinders and water containers for washing utensils, do not have a specific place of their own, but are placed randomly in between the sites. For example, a vendor selling fish sits cheek by jowl with a clothes seller.

Relocated here from other places like Sector 17, Sector 19 and Sector 22, the majority of these vendors  are a disaffected lot. “I was earlier making a living outside Neelam theatre, but after shifting here two months back my business has dropped substantially,” said Meena, a lehnga seller. “I am not even able to support my family”.

It’s 6 pm on a Saturday and Zakir Hussain, another vendor who was shifted from Sector 22, selling leather belts and purses says that he has been able to sell goods worth only Rs 500 so far during the day. “My personal expenses per day amount to Rs 500,” said Zakir Hussain. Originally from Tundla in Faizabad, Hussain has been residing in Chandigarh for the last 38 years. “My two girls go to school. How am I going to support them?” 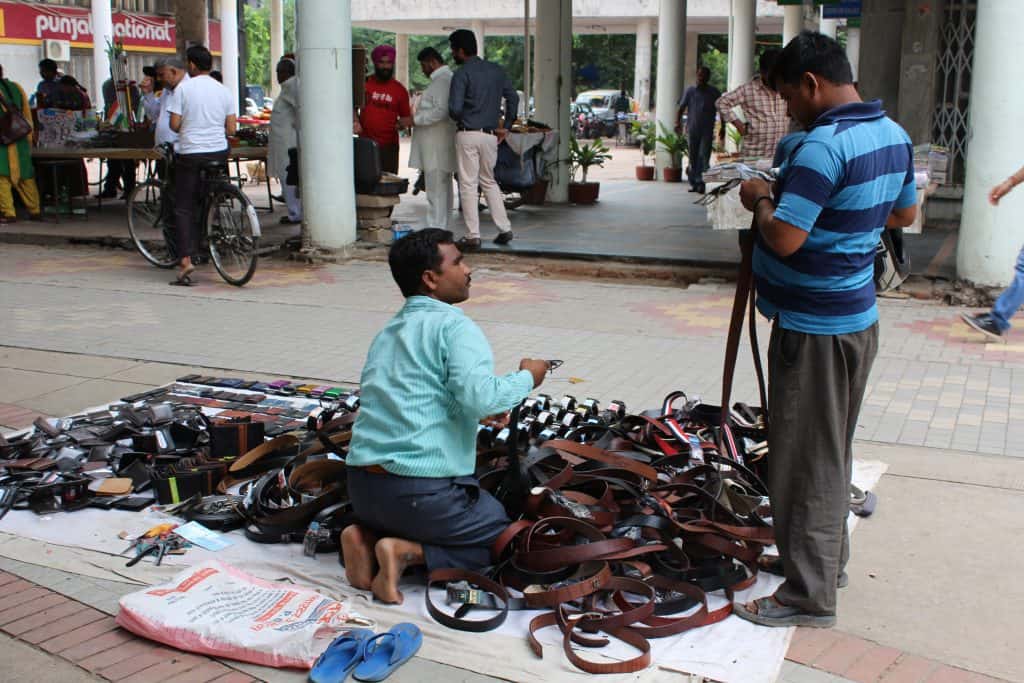 Vendors say that the MC authorities have not done enough to develop the new site as a market. Whereas earlier most of them operated in main market areas, the new vending zone is at a distance from the main road. Also, drinking water facilities are inadequate and there is only one toilet for the entire zone. MC authorities recently arranged for a water tanker at the location but vendors say that it does not come regularly. “They have done nothing more than draw lines to demarcate the vending sites,” said Navin Kumar Manchanda. The vendors operate under an open sky and are forced to close shop on rainy days.

A majority of the vendors had built up business linkages with the local residents in their earlier locations, which they will have to do afresh now in the new zone. “I was operating a Dhaba in Sector 17, but here I am not getting any customers,” said P C Shuka. “We should have been resettled near our original place of work”.  His words are echoed by Manchanda, who operated in Sector 19 earlier. “I was among those allotted a site in Sector 19 originally in the draw of lots but was shifted to Sector 15 without any reason given. We still have space in Sector 19 but I am being made to languish here,” said Manchanda.

All the vendors are dreading the coming summer months. “In the absence of any covering people may faint due to the intense heat,” says 71-years-old vendor Lokesh Kumar Sharma.

The vendors are also not happy with the constitution of the Town Vending Committee. They allege that the vendor representatives have not been chosen through proper elections. “These so called representatives are being manipulated as per the wishes of the authorities,” said a vendor. “The Vendor Act was meant to protect us, instead it has uprooted us”.

The vendors also point to the inadequacies of the ‘survey’ conducted by Haryana Nav Yuvak Kala Sangam with the aim of identifying legitimate street vendors. They allege that the survey teams registered anybody and everybody who claimed to be a vendor without actually checking the details and came up with a figure of 21,631 whereas in reality the number was around 9000.

The surveyors also did not involve the local authorities, such as the nearest police station or the local councillor in the survey drive. “It was done in a haphazard manner and ended up listing bogus people while the real ones were left out. We were promised sites near our original area of work, but we were later evicted from there,” said another vendor. To some extent, these complaints led to the MC terminating the services of HNYKS after the completion of the survey.

But the main sore point among the relocated vendors is the location of the new vending zones. In sector 53, the new vending zone is far from the markets and next to a school wall, where the area is covered by trees on three sides. Not surprisingly, none of the vendors have taken possession of this new site allotted to them.

But it is a different scenario in sectors such as 19 and 22, where the vending zones lie close to the markets. In sector 22, the new zone is opposite Shastri Market, which is popular for its inexpensive items. In this area the vendors expressed satisfaction with the new regulation mechanism despite a marginal decline in business.

(Some names and locations changed on request.)